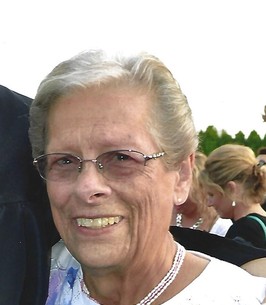 Memorial Candles Lit for Betty | SEE ALL
Light a Candle
"We are honored to provide this Book of Memories to the family."
— Schnurrenberger Chapel
Funeral Details Memory Wall Photos & Videos Send Flowers

Obituary for Betty A. Davie (Mayer)

Print
Betty Davie, 82, of Bellefontaine passed away at her residence January 15 after a 26 year
Battle with cancer.
She was born January 29th, 1936 in Raymond, Ohio to the late Albert and Flora (Kasper)
Mayer.
Betty married John J. Davie on September 26th, 1956 at St. John’s Lutheran Church in
Marysville and he preceded her in death on February 21st, 2003. In addition to her husband and parents, she was also preceded in death by a granddaughter; Jaylyn Johnson; brothers Emerson (Buddy), Burl and Alvin Lee Mayer and a sister, Elda Lyons.
Betty is survived by a daughter, Tina (Norm) Johnson; grandson’s, Landon and Cameron all of
West Mansfield; a sister, Doris Graham of Columbus and sisters-in-law, Kay Mayer of Columbus and Dormalee (Nikki) Mayer of Plain City and several nieces and nephews.
Betty worked for Logan Hills and Ben Logan School Districts through the remedial reading
Program from 1968 to 1974. After leaving Ben Logan she worked at Ludlow Center in Bellefontaine from 1976 to 1995. She was floor supervisor for the Center’s workshop. She truly
enjoyed working with children and young adults to learn everyday tasks.
Betty was extremely proud of her two grandsons Landon and Cameron. She was an avid
supporter of their sporting events. Her favorite sports were basketball and football where you
would find her in the stands enjoying a good game for over 50 years. She was a member of St. John’s Lutheran Church in Marysville and New Salem Lutheran
Church near Zanesfield.
Our family would like to give a special thanks to Donna and Therese with hospice. You both
have been a true blessing.
Friends may call from 5-8 P.M. Friday at Wilson Funeral Home, Schnurrenberger Chapel 222 W. Center St. West Mansfield. Funeral services will be held at 2:00 P.M. Saturday at the funeral home. Burial will follow at York Cemetery. In lieu of flowers, a gift may be given to the New Salem Lutheran Church 6646 State Route 540 Bellefontaine or Universal Home Hospice 701 South Main Bellefontaine. Condolences may be sent to the family at www.wilsonfuneralhomesinc,com


To send flowers to the family of Betty A. Davie (Mayer), please visit our Heartfelt Sympathies Store.

We encourage you to share any memorable photos or stories about Betty. All tributes placed on and purchased through this memorial website will remain on in perpetuity for future generations.

Provide comfort for the family of Betty A. Davie (Mayer) by sending flowers.
Send Flowers

GT
Tina, I was so sorry to learn of the passing of your mother. Your family were great neighbors to my family. We spent lots of times together. We had some great cookouts in the summers. My thoughts and prayers are with you.
Gary Thompson - Wednesday January 23, 2019 via Condolence Message

EM
Tina and the entire Mayer family we pray that our True God will grant you strength,comfort and peace during this time of sorrow. Betty and I are cousins and in early days would play together at family gatherings. In our adult years we would visit occasionally but looking back not frequently enough. Betty will be missed but not forgotten. We will not be able to attend visitation or the funeral for we are out of state. However our prayers will be with all of you.
Eugene & Ruth Ann Mayer
Marysville,OH
Eugene Mayer - Friday January 18, 2019 via Condolence Message

JO
Tina, I am so sorry. Bette never showed anything but her beautiful smile. She will be sorely missed by all who knew her and her courage.
Judy Newland Oldiges - Thursday January 17, 2019 via Condolence Message

SE
Tina, my thoughts and prayers are with you during this difficult time of loss.I have such fond memories of your mom. What a wonderful lady.
Sam Evans - Wednesday January 16, 2019 via Condolence Message

MS
Tina and family, Sending condolences to you and family. Betty a fun loving person.She was a courageous dear soul and now rests in peace free of pain. God will comfort you in your loss.
marilyn Shelton-Evans - Wednesday January 16, 2019 via Condolence Message

KB
Tina, so sorry to hear about your loss. Prayers for you and your family.
Kerri Barthauer - Wednesday January 16, 2019 via Condolence Message
1
Page 1 of 1
Share
×