To share your memory on the wall of Charles Feenstra, sign in using one of the following options:

Print
Charles E. “Charley” Feenstra, 67, of Marysville, passed away the week of March 11th, 2019 at his residence.

A 1969 graduate of Marysville High School, he went on to earn his bachelor’s degree from DePaw University. He first worked... Read More
Charles E. “Charley” Feenstra, 67, of Marysville, passed away the week of March 11th, 2019 at his residence.

A 1969 graduate of Marysville High School, he went on to earn his bachelor’s degree from DePaw University. He first worked as a manager with a Goodyear retail store before going to Wright-Patterson Air Force Base where he worked as a finance specialist and was instrumental in the sale of F-15’s to Egypt. He was currently working as a driver with TRC in Marysville. He was a longtime member of the First Presbyterian Church. In his younger years, he enjoyed boating, spending time at the lake and snow skiing.

Born April 5, 1951, he was the son of the late John and Doris (Chandler) Feenstra. In addition to his parents, he was also preceded in death by a stepfather, Dwight Story and a brother, John Robert “Bob” Feenstra.

A gathering of family and friends will be held from 10:00 A.M.-12:00 P.M. Friday, April 5, 2019 at Wilson Funeral Home, Mannasmith Chapel. A memorial service will follow at 12:00 P.M. with Reverend Jeff Schooley officiating and burial will be held privately at a later date by the family. In lieu of flowers, the family kindly requests memorial contributions to either First Presbyterian Church or the Union County Humane Society in memory of Charley. Condolences may be sent to the family at www.wilsonfuneralhomesinc.com
Read Less

We encourage you to share your most beloved memories of Charles here, so that the family and other loved ones can always see it. You can upload cherished photographs, or share your favorite stories, and can even comment on those shared by others.

Posted Apr 05, 2019 at 04:32pm
Charlie joined several of us for lunch recently. All had a good time catching up! Sad it was our last! Also sad we are out of town today! Barbara and Doug Wenzel
Comment Share
Share via:
B 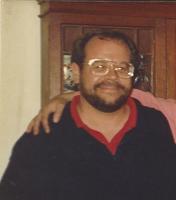