To share your memory on the wall of Harold Pack, sign in using one of the following options:

Print
Harold Pack, 70, of Marysville, died early Monday morning after a lengthy illness at Prestige Gardens and heaven gained another precious angel (a really ornery and stubborn one).

Born July 5, 1949 in Urbana, he was the son of the late Ge... Read More
Harold Pack, 70, of Marysville, died early Monday morning after a lengthy illness at Prestige Gardens and heaven gained another precious angel (a really ornery and stubborn one).

A 1967 graduate of Marysville High School, he went on to a career in sales/agronomy that spanned over 50 years with O.M. Scotts, Ohio Seed Company, Land O’ Lakes and LaCrosse Forage and Turf from which he retired. He was a member of the Marysville Eagles 3506 and the Indian Lake Moose 1533. He was happiest spending time at the Indian Lake cottage enjoying his family, buddies, campfires and a cold beer.

On September 18, 1992 in Franklin County, he married Bernie Collins-Dawkins, and she survives in Marysville. Also surviving are his children, Joe Pack of Marysville, Jenni (Marc) Ernst of Dublin and Chase Dawkins of Reno, NV; grandchildren, Nick, Connor and Jake; a sister, Shirley (Harold) Gilliam of Richwood; nephews, Dean, Terry and Brian and his faithful four-legged companion, his dog Rosie.

The family always believed that cardinals appear when angels are near. A single cardinal sat above or below dad’s window the entire weekend. Dad was stubborn about giving up, VERY stubborn (much like he was about a lot of things in life). In his final hours we walked outside to find TWO cardinals sitting on top of his window. I guess God needed to send reinforcement to drag his stubborn-butt home to be greeted by his beloved late dog Buck.
RIP, Dad. We love you! Stay out of trouble up there!!
Friends may call from 3-7 P.M. Thursday at Wilson Funeral Home, Mannasmith Chapel where services will be held immediately following the calling hours at 7:00 P.M. Memorial contributions can be made to the funeral home and will be given to Prestige Gardens Activities Department. Condolences may be expressed to the family at www.wilsonfuneralhomesinc.com
Read Less

To send flowers to the family or plant a tree in memory of Harold Pack, please visit our Heartfelt Sympathies Store.

Receive notifications about information and event scheduling for Harold

We encourage you to share your most beloved memories of Harold here, so that the family and other loved ones can always see it. You can upload cherished photographs, or share your favorite stories, and can even comment on those shared by others.

Love, Steve and Kathy, Syngenta Family, and other have sent flowers to the family of Harold Pack.
Show you care by sending flowers

Posted Aug 23, 2019 at 12:43pm
so Sorry to hear about the loss of Harold. What a great friend thru the years. Sending Joey and Jenny our love and hugs. Rip dear harold
Comment Share
Share via:
J

Posted Aug 22, 2019 at 09:36am
Harold was always an ornery, jokingly fun man to wait on! My love and prayers go out to Bernie and his children. He will definitely be missed at Moose Lodge 1533!! Much love, Jane and Dwaine Brown
Comment Share
Share via:
HS

Posted Aug 22, 2019 at 07:58am
Bernie, Joe, Jenni and family - Thinking of you all and holding you close to our hearts. Love to all! Colin, Karol, Natalie and Connor

Flowers were purchased for the family of Harold Pack. Send Flowers

Posted Aug 22, 2019 at 07:14am
Wishing you peace to bring comfort, courage to face the days ahead and loving memories to forever hold in your hearts. Harold will be fondly missed!

Posted Aug 21, 2019 at 02:44pm
Please accept our most heartfelt sympathies for your loss... Our thoughts are with you and your family. 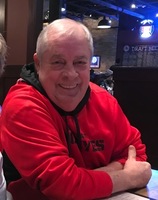