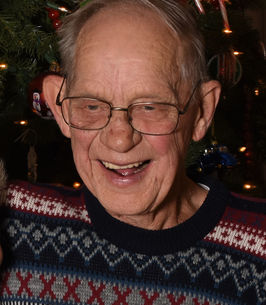 Memorial Candles Lit for Pete | SEE ALL
Light a Candle
"We are honored to provide this Book of Memories to the family."
— Wilson Funeral Home
Funeral Details Memory Wall Photos & Videos Send Flowers

Obituary for Pete B. Hughes

Print
Pete B. Hughes, 84, of Marysville, died peacefully Friday, December 21, 2018 at his residence after few months of failing health.
A 1952 graduate of Belfrey High School, he enlisted in the U.S. Navy and served on the USS Joyce and the USS Borie. He worked at Ranco for more than 30 years and enjoyed spending time out working in his yard. His biggest joy came from spending time with his family and attending his grandchildren’s activities.
Born September 2, 1934 in Stone, KY, he was the son of the late Algie and Charity (Jesse) Hughes. In addition to his parents, he was also preceded in death by his sisters, Patsy Van, Elajean Maynard and Anna May Thomas and his brothers, Bernie, J.D., Herschel and Ed Hughes.
On August 10, 1961 at the Presbyterian Church in Plain City, he married his wife of over 57 years, Stella (Hinderer) Hughes and she survives in Marysville. He is also survived by a daughter, Teri (Brad) LeMaster of Port St. Lucie, FL; a son, Rick (Kelly) Hughes of Marysville and his grandchildren, Jared and Allison LeMaster and Brayden and Kendell Hughes.
In keeping with Pete’s wish’s, no calling hours or services will be held at this time and burial will take place at a later date. Memorial contributions can be made to the charity of the donor’s choice. Arrangements are being handled by Wilson Funeral Home, Mannasmith Chapel. Condolences may be sent to the family at www.wilsonfuneralhomesinc.com


To send flowers to the family of Pete B. Hughes, please visit our Heartfelt Sympathies Store.

Interment Extra Info
Burial to be held at a later date.
Send Flowers for Pete's interment

We encourage you to share any memorable photos or stories about Pete. All tributes placed on and purchased through this memorial website will remain on in perpetuity for future generations.