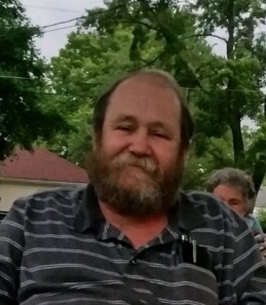 Memorial Candles Lit for Richard | SEE ALL
Light a Candle
"We are honored to provide this Book of Memories to the family."
— Wilson Funeral Home
Funeral Details Memory Wall Photos & Videos Send Flowers

Print
Richard A. “Dickie” Bolenbaugh, 62, of Marysville, died Saturday, February 23, 2019 at his residence
A 1974 graduate of Marysville High School, he retired from Picklesimer Trucking where he worked as a mechanic and truck driver for over 25 years. He was also a member of the Seabees with the United States Naval Reserves.
He was fun loving, quick witted and a devoted husband, father and grandfather. He loved spending time with his family, especially his grandchildren. In his free time, he enjoyed vacations to Gatlinburg, going to flea markets and demolition derbies, working on the farm with Tony and of course, his mornings spent at Mrs. Renison’s Donuts.
Born July 30, 1956 in Union County, he was the son of the late Richard A. “Ted” and Kathryn (Bendler) Bolenbaugh. In addition to his parents, he was also preceded in death by a sister, Rebecca Bolenbaugh and a brother, Kevin Bolenbaugh.
He is survived by his wife of over 41 years, Patty (Wibley) Bolenbaugh, whom he married June 25, 1977 in Marysville. Also surviving are his children, Angela (Tony) Randall of Urbana, Richard (Wendy) Bolenbaugh III of Marysville and Daniel (Angela) Bolenbaugh of Reynoldsburg; grandchildren, Brooklyn, Courtney, Daniel, Kenny, Nikki, Alexis, Ryder, Tesla, Riley and Bryce; 2 great grandchildren and his sisters, Pam (Donald) Moore and Karla Rawlins both of Marysville.
Friends may call from 5-7 PM Tuesday, February 26, 2019 at Wilson Funeral Home, Mannasmith Chapel. Private graveside services will be held for the family at Oakdale Cemetery at a later date. Memorial contributions can be made to the Limbs for Life Foundation in care of the funeral home. Condolences may be sent to the family at www.wilsonfuneralhomesinc.com


To send flowers to the family of Richard A. "Dickie" Bolenbaugh II, please visit our Heartfelt Sympathies Store.

We encourage you to share any memorable photos or stories about Richard . All tributes placed on and purchased through this memorial website will remain on in perpetuity for future generations.

George and Dee Harder and The Pavers sent flowers to the family of Richard  A. "Dickie" Bolenbaugh II.
Send Flowers

with our deepest sympathies
George and Dee Harder - Tuesday February 26, 2019 via Heartfelt Sympathies | Order flowers in memory of Richard

GH
So sorry to hear of Dickie's passing, he and George were very close friends for many years in their youth. We will be keeping the family in our prayers and know that we will miss him.
George and Dee Harder - Tuesday February 26, 2019 via Condolence Message

Our deepest sympathies go out to your family. He was a great man and will be missed greatly!
The Pavers - Monday February 25, 2019 via Heartfelt Sympathies | Order flowers in memory of Richard

AB
He wa# such a blessing. One of the nicest people I know. I’m so sorry for your loss.

J
I’m so sorry for your loss, you and the family are in my thoughts and prayers. He was a nice guy and will miss seeing him at the donut shop
Jeanne Vannatta - Monday February 25, 2019 via Condolence Message

SW
So sorry for your loss. May all your memories bring you comfort.
Sue (Waugh) Wright - Monday February 25, 2019 via Condolence Message

JG
I will miss Dickie so much. He was one of the kindest people I have ever met. I will miss seeing him at Mrs. Renisons in the mornings before I go to work. He will always be a great memory to me. See you in heaven Dickie.
Jeff G - Monday February 25, 2019 via Condolence Message

DS
I was sad to hear of Dickie's death. My sister Sandy went to school with him and our Mom's were good friends. My Mom grieved with Katherine, when she lost Kevin. My Mom was Katherine Woyan Cooper. She passed away at age 59. It wasn't long till Kathryn passed to. My deepest condolences to the family.
DIANA Salyers - Monday February 25, 2019 via Condolence Message
1
Page 1 of 1
Share
×