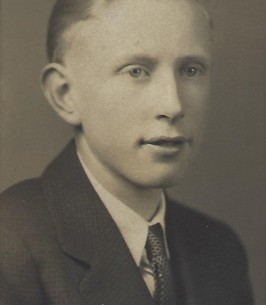 Memorial Candles Lit for Walter | SEE ALL
Light a Candle
"We are honored to provide this Book of Memories to the family."
— Schnurrenberger Chapel
Funeral Details Memory Wall Photos & Videos Send Flowers

Print
Walter F. Staley, 101, of West Mansfield, died Saturday, January 5, 2019 at Brookdale of Marysville surrounded by his family.
A 1935 graduate of York Center High School, he was a lifetime farmer on the family farm in Union county. Family, farming and church were his life. Walter was a man of deep faith, integrity and humility. He was well known for his knowledge of the history of Union county. He was a member of the York Center United Methodist Church, and was a former member of the McKendree Methodist Church where he served as Sunday school superintendent, was a member of the Byhalia-York School Board, the Grange, the Farm Bureau, Milk Producers Association and was an original member of the Young Yankee Yorkers 4-H Club. He enjoyed woodworking, and in his later years he and Frances would attend craft shows together to share their work. Most important of all was his time spent with his family.
Born October 10, 1917 in York Center, he was the son of the late Dale F. and Marietta (Spangler) Staley. On April 6, 1941 in York Center, he married his loving wife of nearly 73 years, Frances Ruth (Shoup) Staley at her parent’s home and she preceded him in death on March 13, 2014. In addition to his wife and parents, he was also preceded in death by a grandson, Dr. Craig Cooley; a sister and her husband, Donna and Gerald Ruhl, and a brother-in-law, Ralph Shoup.
He is survived by his children, Cheryl Cooley and Sharon (Bill) Kelley both of Marysville and Merrill (Beverly) Staley of West Mansfield; grandchildren, Eric Cooley, Shawn (Linda) Cooley, Angela (George) Hill, Matthew (Andrea) Staley, Mark (Betsy) Staley, Shannon (Travis) Upton, Paul (Kristen) Kelley and Sarah (Erich) Piland; great grandchildren, Krandi, Brandon, Chase, Shawnna, Christian, Delaney, Katelyn, Rhett, Ryan, Brady, Kendal, Caleb, Spencer, Karlyn, Oliver, Kathryn, William, Sophia, Avery, Norah and Paige; great-great grandchildren, Makayla, Mia and Jaxson; and his church family.
Friends may call from 5-8 P.M. Wednesday, January 9, 2019 at Wilson Funeral Home, Schnurrenberger Chapel 222 W. Center St. West Mansfield. Funeral services will be held at 11:00 A.M. Thursday, January 10, 2019 at York Center United Methodist Church 28170 SR 739 West Mansfield. Pastor Carl Redding and Pastor Joe Rhea will officiate and burial will follow at York Cemetery. Memorial contributions can be made to the York Center United Methodist Church. Condolences may be sent to the family at www.wilsonfuneralhomesinc.com

To send flowers to the family of Walter F. Staley, please visit our Heartfelt Sympathies Store.

We encourage you to share any memorable photos or stories about Walter. All tributes placed on and purchased through this memorial website will remain on in perpetuity for future generations.

Provide comfort for the family of Walter F. Staley by sending flowers.
Send Flowers
next page >>
Page 1 of 0
Share
×