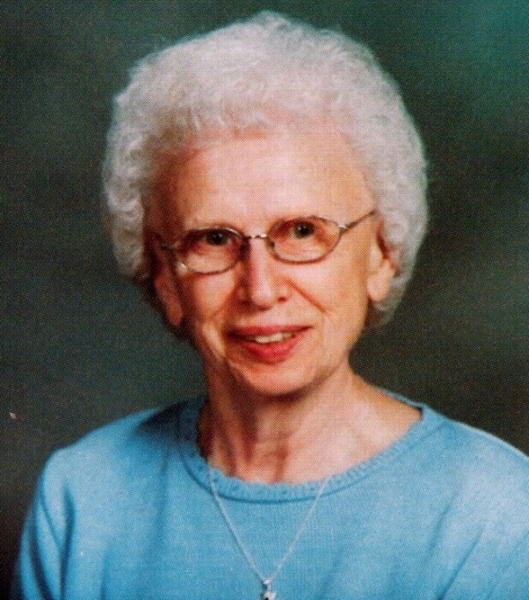 Born July 11, 1925 in Marysville, she was the daughter of the late George L. and Matilda Sophia (Starr) Rausch. In addition to her parents, she was also preceded in death by her siblings and their spouses, Irene (Milton) Scheiderer, Robert W.J. (Caroline) Rausch, Harold C. (Doris) Rausch and Erma (Eugene) Wilkins, along with her brothers and sisters-in-law, Marlo (Gertrude) Beckel and Cletus (Joy) Beckel.

Anita is survived by her many nieces and nephews and their families, as well as several dear friends, her church family, and caregivers from Memorial Gables at Green Pastures.

A life-long Christian, she was baptized, confirmed, and married at St. John’s Lutheran Church where she was also a faithful member all of her life. Prior to her marriage, Anita was employed at the Scott’s Company and was a member of the 20 year Club for many years. She was also an avid fan of the Ohio State Buckeyes.

Funeral services will be held at 2:30 P.M. Wednesday, April 20, 2022 at the St. John’s Lutheran Church 12809 S.R. 736 Marysville, with Rev. Jacob D. Heino officiating. Burial will be held at11:00 A.M. Thursday, April 21, 2022 in the Marion Cemetery 620 Delaware Ave. Marion. The family will receive friends beginning at 12:30 P.M. until the time of the service on Wednesday at the church. The funeral service will be livestreamed on Facebook/jack.heino, beginning at 2:30 P.M. Wednesday. Memorial contributions can be made to the St. John’s Lutheran Church or the charity of the donor’s choice. Arrangements are being handled by Wilson Funeral Home, Mannasmith Chapel 621 W. Fifth St. Marysville. Condolences may be sent to the family at www.wilsonfuneralhomesinc.com

To order memorial trees or send flowers to the family in memory of Anita Beckel, please visit our flower store.