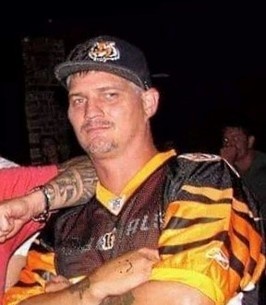 Christopher W. Simpson, 44, of Marion, and formerly of Marysville, died Wednesday, June 5, 2019 at the O.S.U. Wexner Medical Center in Columbus.
He worked at both of the Wendy's locations in Marysville and also worked at the Delaware location, but he was best known as the "Merch Man." Serving as both merchandise manager and stage manager for the band XFACTOR1. An avid sports card collector, he could look at nearly any card and know the value right away. He enjoyed rooting for the Cincinnati Reds and the Cincinnati Bengals, but also enjoyed rooting against the Pittsburgh Steelers.
Born August 10, 1974 in Clarksville, TN, he was the son of the late Charles William and Martha A. (Neal) Simpson. In addition to his parents, he was also preceded in death by an uncle, Elmer Dale "Uncle Bubby" Simpson; a half-brother, Jeremy Broderick; a nephew, Brandon Nelson and a step-mother, Donna Simpson.
He is survived by his daughter, Aribella Simpson; sisters, Tammy (Warren Hetrick) Nelson of Marion and Tanya (Douglas) Smith of Marysville; a brother, Robert (Michelle) Simpson of Delaware; companion, Julie Zedeker; half-brothers, Jarett Broderick of Ohio and Josh Broderick of Maine and numerous nieces and nephews.
A gathering of family and friends will be held from 12-2 P.M. Saturday, June 15, 2019 at Wilson Funeral Home, Mannasmith Chapel. In keeping with one of Chris's wishes, please feel free to wear the attire of your favorite sports team to this time of celebration. Burial will be held at a later date. In lieu of flowers, the family requests memorial contributions be made to the family in care of the funeral home to help with the unexpected expenses. Condolences may be sent to the family at www.wilsonfuneralhomesinc.com

To order memorial trees or send flowers to the family in memory of Christopher Simpson, please visit our flower store.