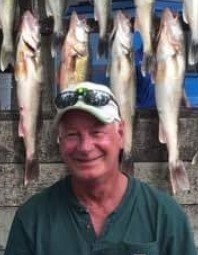 George Nelson Baxley, 65, lifetime resident of East Liberty, passed away peacefully on Monday, April 11, 2022 at his residence surrounded by his loving family.

A devoted husband, father and grandfather, Nelson loved spending time with his family, especially his grandchildren. He also loved farming, living almost his entire life on the Baxley family farm. Honest, with a good heart, he also had a very strong work ethic which started at age 13 when he began trapping to earn his spending money. In his older years, he liked to reward his long work days with a cold Miller Genuine Draft. An avid deer hunter, NASCAR fan, and San Francisco Forty-Niners fan, he also played softball for many years. His true passion and enjoyment came from his time spent fishing for Walleye on Lake Erie.

A 1975 graduate of Benjamin Logan High School, Nelson has farmed all of his life and also worked at Honda of America for 26 years, retiring in 2007.

Born August 10, 1956 in Bellefontaine, he was the son of the late Herbert V. Baxley and Gracie (James) Bullock.

It was during his time at Honda that a young lady named Deborah Holford would catch his eye, and soon after they would marry on April 12, 1984 in Bellefontaine. They would share one day short of 38 years together. In addition to his wife, he is also survived by his step-mother, Ardella S. Baxley of East Liberty; children, Nicholas Scharf of Columbus, Erin Scharf of Lakeview and Kelly (fiancé, Lindsay Blumenschein) Baxley of East Liberty; grandchildren, Connor Scharf, Gabe Fortner, Kaylee Queen, Hayden Baxley, Evelyn Baxley, Kali Baxley and Brady Baxley; brothers and sisters, Tracey (Shelley) Baxley of West Mansfield, Stacy (Scott) Faller of Fairborn, Rod Bullock and Missy Bullock, both of Orlando, FL; along with numerous nieces, nephews, cousins and other extended family and friends.

In keeping with Nelson’s wishes, no calling hours will be observed, a graveside service will be held at 1:00 P.M. Saturday, April 23, 2022 at the East Liberty Cemetery. In lieu of flowers, the family kindly requests memorial contributions be made to Universal Hospice 935 Rush Ave. Bellefontaine, OH 43311 or in care of the funeral home. Arrangements are being handled for the family by Wilson Funeral Home, Schnurrenberger Chapel 222 W. Center St. West Mansfield. Condolences may be sent to the family at www.wilsonfuneralhomesinc.com

To order memorial trees or send flowers to the family in memory of George Baxley, please visit our flower store.