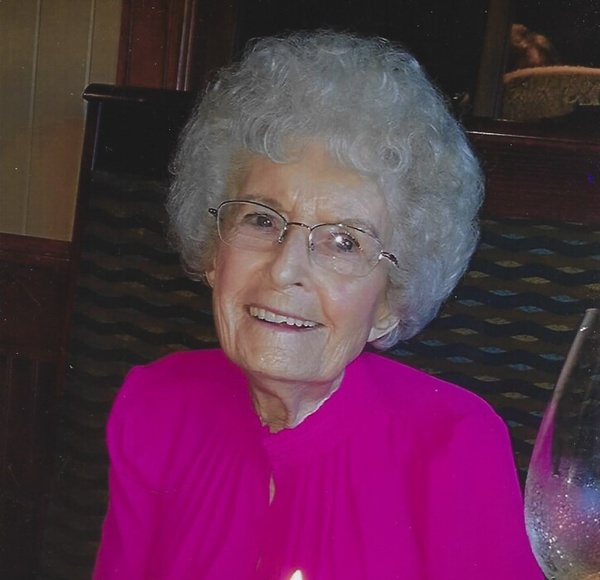 Goldie Fern Garwood, 97 of West Mansfield passed away peacefully on Tuesday, April 6, 2021 at her residence.

A longtime associate of Uhlman’s Department Store, Goldie formerly was employed with P.K. Lumber during her husband’s employment tenure and also worked by his side for many years as an associate with Mannasmith-Schnurrenberger Funeral Home. She was a faithful member of the West Mansfield Church of Christ where she served as a Sunday school teacher and music leader and had been its longest serving member, joining in 1935.  Goldie attended West Mansfield High School.  She was a member of the Order of the Eastern Star, Harriet Chapter #252 and was honored to serve as the Grand Representative to Tennessee in Ohio from 1997-1999.  She started in 1950 and was a charter member of the Star Light Circle of Kings Daughters and Sons and served as State Junior Director from 1965-1969.  She was a longtime member of the Hi-Point See-Saws Square Dance Club.  For several years she and her husband were campers at Kamp-A-Lot campground in Zanesfield and enjoyed traveling and camping with their Airstream trailer.  She was a devoted wife and will be remembered for her homemade fudge and her butterscotch and pecan pies.

She was born September 14, 1923, in West Mansfield to the late Lloyd and Clara Smith Orahood.  She was married to Francis “Bud” Garwood on July 12, 1943, in West Mansfield by Rev. Earl Bragg, and he preceded her in death on June 19, 2005.  She was also preceded in death by five sisters and their spouses, Frieda and Clarence Amos, Marie and Dale Wilson, Nadine and Dave Clagg, Minnie and Jack Jones and Sandra (Knight) Slaven and Willis Knight and Joe Slaven;  five brothers and their spouses, Charles and Doris Orahood, Frank and Francis Orahood, Fred and Elma Orahood, Fay and Beulah Orahood, and Francis “Fanny” Orahood; 2 sisters-in-law, Gertie Brown and Nikki (Bob) Orsborn;  and a nephew, David Orahood, who lived with Bud and Goldie for several years.

Survivors include a dear family friend whom Bud & Goldie treated as a daughter, Cindy McCurdy, and her daughters, Jenna & Julia, each of Springfield; her sister, Lela (Greydon) Hone, of Bellefontaine; a brother, Jack Orahood of West Mansfield; dear friends, Tamara Fleming and Nancy (Ronnie) Carpenter, both of West Mansfield along with many nieces, nephews, great-nieces, great-nephews, countless friends and her church family.

Services will be held at 3:00 P.M. Sunday, April 18th, 2021 at the Wilson Funeral Home, Schnurrenberger Chapel, 222 W. Center St. West Mansfield, Ohio.  Pastor Willis Moe will officiate and burial will follow at Greenlawn Cemetery.  Friends may call prior to the service on Sunday from 1:00-3:00 P.M. at the funeral home.  Memorial contributions may be made to the West Mansfield Church of Christ or the American Cancer Society in care of the funeral home. Condolences may be sent to the family at www.wilsonfuneralhomesinc.com

To order memorial trees or send flowers to the family in memory of Goldie Garwood, please visit our flower store.