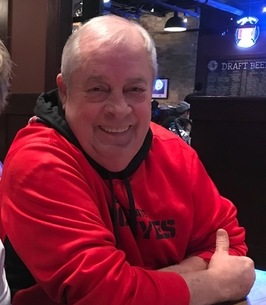 Harold Pack, 70, of Marysville, died early Monday morning after a lengthy illness at Prestige Gardens and heaven gained another precious angel (a really ornery and stubborn one).

A 1967 graduate of Marysville High School, he went on to a career in sales/agronomy that spanned over 50 years with O.M. Scotts, Ohio Seed Company, Land O' Lakes and LaCrosse Forage and Turf from which he retired. He was a member of the Marysville Eagles 3506 and the Indian Lake Moose 1533. He was happiest spending time at the Indian Lake cottage enjoying his family, buddies, campfires and a cold beer.

On September 18, 1992 in Franklin County, he married Bernie Collins-Dawkins, and she survives in Marysville. Also surviving are his children, Joe Pack of Marysville, Jenni (Marc) Ernst of Dublin and Chase Dawkins of Reno, NV; grandchildren, Nick, Connor and Jake; a sister, Shirley (Harold) Gilliam of Richwood; nephews, Dean, Terry and Brian and his faithful four-legged companion, his dog Rosie.

The family always believed that cardinals appear when angels are near. A single cardinal sat above or below dad's window the entire weekend. Dad was stubborn about giving up, VERY stubborn (much like he was about a lot of things in life). In his final hours we walked outside to find TWO cardinals sitting on top of his window. I guess God needed to send reinforcement to drag his stubborn-butt home to be greeted by his beloved late dog Buck.
RIP, Dad. We love you! Stay out of trouble up there!!
Friends may call from 3-7 P.M. Thursday at Wilson Funeral Home, Mannasmith Chapel where services will be held immediately following the calling hours at 7:00 P.M. Memorial contributions can be made to the funeral home and will be given to Prestige Gardens Activities Department. Condolences may be expressed to the family at www.wilsonfuneralhomesinc.com

To order memorial trees or send flowers to the family in memory of Harold Pack, please visit our flower store.