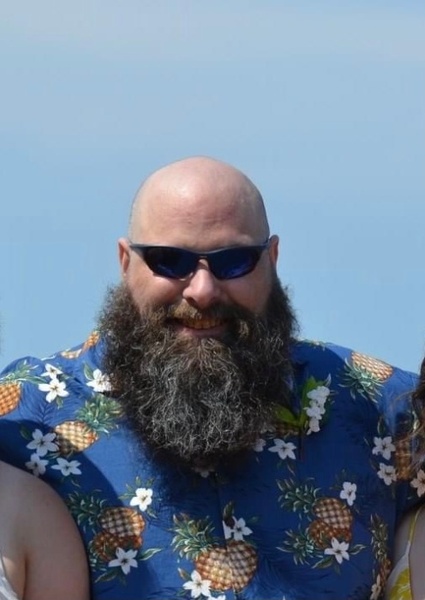 A 1987 Graduate of Ridgedale High School, Lee was a press operator at Whirlpool Corp. in Marion for the last 13 years. He truly enjoyed his time spent with his wife and daughters. They loved evenings spent going to dinner, watching movies and playing games together. He also looked forward the family vacation at the beach every year. Lee will definitely be remembered for his unique sense of humor and his one-of-a-kind laugh.

On a beautiful sunny day, July 8, 2020 next to the beach in Marblehead, he married Teri L. Henning and she survives in Marion. He is also survived by his daughters, Jessica (fiancé, Austin Kuczewski) Scates and Sarah Scates both of Marion; a sister, Meredith (Woody) Wilson of West Mansfield; an uncle, Michael (Debbie) Scates of Raleigh, NC; father and mother-in-law, Ed and Jo Henning of Marion; a brother-in-law, Scott Henning of Ada; a sister-in-law, Kelli (DJ) Dowell of Delaware; nephews, Brody Wilson and Austin Dowell and a niece, Hailie Dowell.

In keeping with Lee’s wishes, no calling hours or services will be held at this time. A memorial gathering is being planned and will be announced at a later date. Burial will also be held at a later date in the Grand Prairie Cemetery. Arrangements are being handled by Wilson Funeral Homes 621 W. Fifth St. Marysville. Condolences may be sent to the family at www.wilsonfuneralhomesinc.com

To order memorial trees or send flowers to the family in memory of James Scates, please visit our flower store.