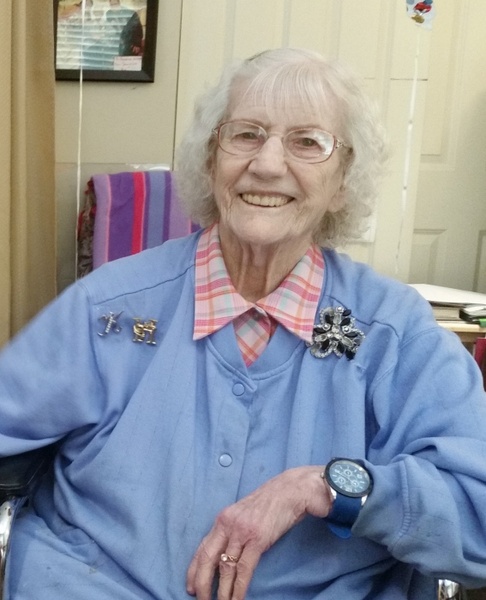 A loving homemaker, she and her late husband formerly owned and operated Hoover’s Mobil Gas Station in Raymond for nearly 15 years.  She was affectionately known as the “unofficial Mayor” of Raymond. A member of the Old Union Church of Christ, she was a 1945 graduate of East Liberty High School.  Katherine enjoyed volunteering for the Northwestern Lions Club and was a longtime supporter of the Union County Fair.  She loved yard sales and oftentimes would donate the proceeds from her own yard sales to the Liberty Township Fire Department.  She and her family attended the Ohio State fair annually.  Katherine enjoyed stamp collecting and visiting with friends and will be remembered for her love of flowers, gardening, canning vegetables, coloring, word search puzzles and her terrific sense of humor. She also took great pride in supporting her grandchildren by attending musical productions and sporting events.

She was born June 4, 1926, in West Mansfield to the late Sherman and Biance Breece Kerns.  She married Ted N. Hoover on August 21, 1947, and he preceded her in death on October 17, 2004.  In addition to her husband and parents, she was also preceded in death by 2 sons, John Hoover and Jim Hoover, sisters, Julia Kerns, Margaret Brooks and Mary Binkley and her brothers, LeRoy, Ralph and Lewis Kerns.

Friends may call beginning at 11:00 A.M. until the time of the funeral service at 1:00 P.M. on Friday, February 25, 2022 at Wilson Funeral Home, Mannasmith Chapel. Joe Thompson will officiate and burial will take place at Millcreek Cemetery.  Memorial contributions may be made to Loving Care Hospice or the Liberty Township Fire Department. Condolences may be sent to the family at www.wilsonfuneralhomesinc.com

To order memorial trees or send flowers to the family in memory of Katherine Hoover, please visit our flower store.