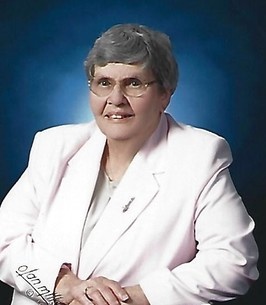 Lois Jean (Logelin) Gruenbaum, 92, died peacefully Friday, November 15, 2019 at Memorial Gables with family by her side.
Lois was born March 13, 1927 in Detroit, MI, to the late George B. and Edna (Andre) Logelin. When she was age three, the family moved to Cleveland. She attended Lutheran Hospital School of Nursing in Cleveland, and early in her career she cared for returning wounded service personnel from World War II.
On August 30, 1947, she married Donald L. Gruenbaum (deceased) and moved from Cleveland to a farm outside Marysville on Fladt Road, to live a country life which she loved. She continued her career at Marysville Memorial Hospital as a practical nurse in general and private duty.
In 1955, Lois was diagnosed with cancer, which at that time was regarded as a certainty of imminent demise. However, under the care of renowned cancer specialist Dr. Arthur James, her right leg was amputated at the hip, and she survived to serve as an inspiration to other patients who received similar diagnosis. Lois spent the majority of the rest of her life on crutches, which, although presenting challenges, did not slow her down. Throughout her life she continued to work in various positions, including work with radio stations WDCR and WUCO reporting on local and state governmental affairs and events throughout Union County, raising four children at the same time.
Lois did not just report on events, but was very active in community service herself. She served on the
Marysville Board of Zoning Appeals, the Scenic Byways, Covered Bridge Festival, and the Historical Marker Commemorative committee. She also served for 45 continuous years on the Marysville Memorial Day Committee. She was past President of the American Legion Post 79 Auxiliary; past
President of the 6th District American Legion Auxiliary; served as the American Legion Department of
Ohio Department musician as a pianist; past President of the Blue Star Mothers Chapter 41 and department musician; past Chaplain of the Ladies Auxiliary to Veterans of Foreign Wars Post 3320; past Chapeau of Marion Salon 251 of the 40 et 8 and a member of 40 et 8 La Femmes Cabane Grande du Hawaii.
In 2008 she received a Community Leadership Award from the Marysville Chamber of Commerce, and in
2016 was inducted into the Central Ohio Senior Citizens' Hall of Fame.
She is survived by her four children, David (Adriana) of Fairfax, VA, Donna (Keith) Brinkoetter of Ft.
Mohave, AZ, Daniel (Roxanne) of Winter Park, FL, and Douglas of Marysville, OH. She is also survived by six grandchildren, David Michael (Andrea) of Layton, UT; Natalia (Captain, U.S. Army); Lauren, of
Winter Park, FL; Nicholas, of Lake Mary, FL; Danielle (1st Lieutenant, U.S. Army); and Alexander, of
Lake Mary, FL. Her younger sister, Betty Lou Peters, of Albany, NY, predeceased her in 2017.
A memorial service will be held at St. John's Lutheran Church, State Rt. 736, Marysville, OH 43040, at
7 P.M. on Friday, December 13, 2019 with Reverend Jacob D. Heino officiating. Burial will take place at the church cemetery at a later date. Arrangements are being handled by Wilson Funeral Home, Mannasmith Chapel. Condolences may be sent to the family at www.wilsonfuneralhomesinc.com

To order memorial trees or send flowers to the family in memory of Lois Gruenbaum, please visit our flower store.