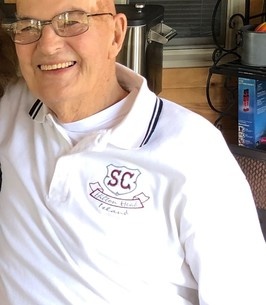 Neal R. Anklam, 82, of Marysville, passed away peacefully, early Sunday morning at his residence with family by his side.
A devoted husband and loving father and grandfather, he loved tinkering with anything mechanical. He loved working on and fixing up items that needed repaired or restored. From plumbing to woodworking, he could do it all and was a true "jack-of-all-trades." He put those skills to good use on the many houses he renovated over the years.
A veteran of the U.S. Air Force, he went on to work as president at Toombs Truck and Equipment in Hilliard for many years. He was also a member of the West Gate Lodge No. 623 F. & A. M. of Columbus.
Born March 31, 1938, in Cleveland, he was the son of the late Elmer and Janice (Klein) Anklam. In addition to his parents, he is also preceded in death by a grandson Kevin McKinney, and a great grandson.
On a cruise to beautiful St. Thomas in the Virgin Islands, he married his wife of 28 years, DeAnna, and she survives in Marysville. He is also survived by his children, Denise (Bob) Drewes of Battle Ground, WA, Machelle (Mark) McKinney of Marysville, Heidi (Dennis) Wotring of Grove City, Candace DeFrancisco of Worthington and Wendi (Justin) Walborn of Ft. Wayne, IN; grandchildren, Meghan, Makayla, Joey (Cara) and Vince (Katie) McKinney, Dominic and Enzo DeFrancisco, Jadyn, Jocelyn and Jacob Walborn; six great grandchildren; a brother, Ray Anklam of Lancaster; a sister, Gail Winter of Westerville and numerous nieces and nephews.
In keeping with Neal's wishes, no calling hours or services will be observed at this time and burial will take place at a later date. Arrangements are being handled for the family by Wilson Funeral Home, Mannasmith Chapel. Memorial contributions in memory of Neal can be made to Honor Flight, OhioHealth Hospice or the Union County Cancer Society in care of the funeral home. Condolences may be sent to the family at www.wilsonfuneralhomesinc.com
To order memorial trees or send flowers to the family in memory of Neal Anklam, please visit our flower store.