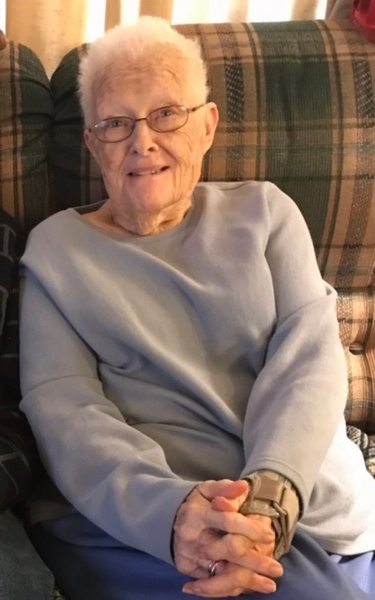 Peggy L. Farrington, 85, of West Mansfield, passed away peacefully on Friday, March 4, 2022 at the Kenton Nursing and Rehabilitation Center with her family by her side.

A homemaker for her husband and children, she also worked at TRC for 18 years. An avid reader, she also enjoyed mowing her yard, working crossword puzzles and watching OSU Basketball with Dallas. Most of all, she enjoyed spending time with her family, especially her grandchildren. She loved watching them play sports and participate in any other activity.

Born February 2, 1937 in Logan County, she was the daughter of the late Charles and Alma Maxine Seaman. On September 1, 1955 in Indiana, she married her husband of over 66 years, Dallas T. Farrington, and he preceded her in death on February 10, 2022. In addition to her husband and parents, she was also preceded in death by a son, Douglas and her sisters, Nancy and Jean.

Calling hours and services will be held privately for the family, and burial will take place at the Byhalia Cemetery. Arrangements are being handled for the family by the Wilson Funeral Home, Schnurrenberger Chapel 222 W. Center St. West Mansfield. If desired, memorial contributions can be made to the charity of the donor’s choice in memory of Peggy. Condolences may be sent to the family at www.wilsonfuneralhomesinc.com

To order memorial trees or send flowers to the family in memory of Peggy Farrington, please visit our flower store.