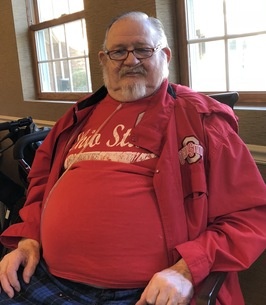 Richard L. Keller, 83, of Bellefontaine, passed away peacefully on Tuesday, January 12, 2021 at Green Hills Community Nursing Home following after many years of failing health.
Born March 18, 1937 in Byhalia, he was the son of the late Glen and Dorothy (Edwards) Keller. In addition to his parents, he was also preceded in death by a son, Richard Thomas Keller; an infant daughter; his brothers, Paul and Gerald Keller and a niece, LuAnn.
A graduate of Byhalia-York High School, he went to serve in the United States Army. After returning home, he worked at Tecumseh Products for over 20 years and with General Industrial in Marysville for several years. In his younger years, he liked to go camping and fishing, has always enjoyed gardening, bird watching, and watching football, especially the Ohio State Buckeyes. He even took to coloring in recent years.
On June 18, 1975 at the Methodist Church in Ridgeway, he married his wife of over 45 years, Linda Sue (McCalla) Keller and she survives in Bellefontaine. He is also survived by his children, John Michael Keller and Tamara Kay Keller, both of Bellefontaine; step-children, James (Erin) Collins of Bellefontaine, Burnie Collins of Kenton and Eric Collins of Plain City; grandchildren, Corey and Keegan Collins, Kylee Robbins and Kennedy (Justin) Miller, his sister, Janet (Jack) Middleton of Mechanicsburg along with numerous nieces, nephews, cousins and other extended family and friends.
Services will be held privately for the family. A public graveside service will be held at 11:30 A.M. Friday, January 15, 2021 at the Byhalia Cemetery with Pastor David Moore officiating. Covid protocols will be observed at the cemetery. Arrangements are being handled by Wilson Funeral Home, Schnurrenberger Chapel 222 W. Center St. West Mansfield. Memorial contributions can be made to the Walnut Grove United Methodist Church in care of the funeral home. Condolences may be sent to the family at www.wilsonfuneralhomesinc.com

To order memorial trees or send flowers to the family in memory of Richard Keller, please visit our flower store.