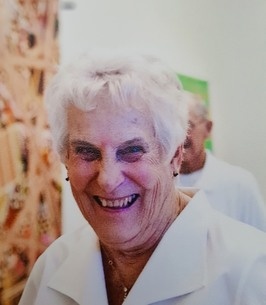 Stella M. Hughes, 86, of Marysville, died Tuesday, April 23, 2019 at her residence.
A graduate of Watkins High School, she worked in retail at Scotts and RANCO, as a manager at Shastar, and most recently as an associate at Big Lots. She enjoyed working in her garden and puzzle books, but she truly enjoyed her crafts. She belonged to a craft of the month club and looked forward to that craft each and every month. She also enjoyed making clothing for her dolls which was evident as their outfits often matched the holiday or seasonal décor of the house.
Born June 14, 1932 in Union County, she was the daughter of the late Clarence and Esther (Fry) Hinderer. On August 10, 1961 in Pain City, she married Pete B. Hughes and he preceded her in death on December 21, 2018. In addition to her husband and parents, she was also preceded in death by a sister, Donna Ruth Hinderer and a brother, Donald Hinderer.
She is survived by her children, Teri (Brad) LeMaster of Port St. Lucie, FL. and Rick (Kelly) Hughes of Marysville; grandchildren, Jared LeMaster, Allison LeMaster, Brayden Hughes and Kendell Hughes; sisters, Mary K. Thompson, Joan Coe, Hazel Lincoln and Doris Fields, and numerous nieces and nephews.
In keeping with Stella's wishes, there will be no calling hours or services held at this time and burial will be held at a later date. Arrangements are being handled for the family by Wilson Funeral Home, Mannasmith Chapel. Memorial contributions can be made to the charity of the donor's choice. Condolences may be sent to the family at www.wilsonfuneralhomesinc.com
No Services to be held at this time.

To order memorial trees or send flowers to the family in memory of Stella Hughes, please visit our flower store.