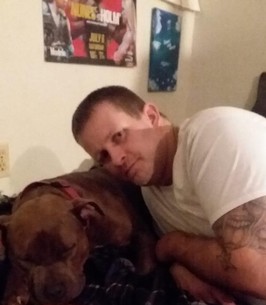 Steven W. "Stevie B" Moore, 39, of Marysville, passed away peacefully Sunday, August 9, 2020 at Riverside Methodist Hospital in Columbus.
Known for his one of a kind laugh and spirited personality, along with that came a big heart which was shown by his love for animals and his joy for spending time with his family and friends, especially fishing with his grandfather Bill and son Dylan. He also enjoyed watching football, most notably the Ohio State Buckeyes, playing softball and listening to country music. Steven was rarely caught without his hard sour candies in his pocket, the sour candy and popcorn were his favorites.
A 1999 graduate of Marysville High School and Ohio Hi-Point masonry program, he went on to work several years with Marysville Masonry.
Born April 7, 1981 in Marysville, he was the son of the late Mark and Sheila (Rausch) Moore.
He is survived by his son, Dylan Moore of Marysville; grandparents, Bill and Susie Rausch of Raymond; aunts and uncles, Tracy Alexander of Marysville, Billy Rausch of Marysville and Penny DeMeo of Bellefontaine; half-sisters, Christina Ballman of Kentucky, Sabrina (Conrad) Gibson of Florida and Samantha (Jason) Hendricks of Kenton along with numerous nieces, nephews, cousins and other extended family and friends including his former high school sweetheart, longtime friend and Dylan's mother, Shannon Deardorff ; "adopted" step-parents, Dylan's grandparents, Phil and Vicki Huey and Dylan's brother, Jayden Deardorff whose life was also touched by Steven.
Friends may call from 4-7 P.M. Wednesday, August 12, 2020 at Wilson Funeral Home, Mannasmith Chapel where funeral services will follow at 7:00 P.M. Burial will take place at a later date. Memorial contributions can be made to Lighthouse Behavioral Health Solutions in care of the funeral home. Condolences may be sent to the family at www.wilsonfuneralhomesinc.com

To order memorial trees or send flowers to the family in memory of Steven Moore, please visit our flower store.