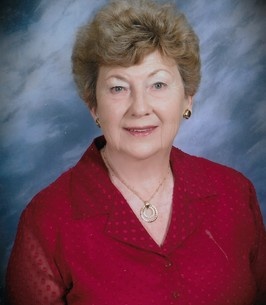 Twyla B. Paul, 87 years of age, died March 6, 2019 at Logan Acres Care Center, Bellefontaine, OH. Twyla was born May 25, 1931 in Logan County, near West Mansfield, the daughter of William and Martha (Oder) Weatherby. She grew up on the Weatherby family farm near North Greenfield. She graduated from East Liberty High School in 1949.
On December 19, 1954, she married Donald Roger Paul in West Mansfield. They were happily married for over 50 years until Don passed away in 2006. She is survived by two sons, Michael (Nancy) of Omaha, NE and Todd (Lori) of Kenton, granddaughter, Kathryn Elise Paul, of Omaha, sister Nira Graham of West Mansfield, and brother, Harry Weatherby, of Richwood. She was preceded in death by three brothers; William, Gary and Dave Weatherby.
Twyla earned a Bachelor Degree in education from Bowling Green State University and a Master of Arts Degree in School Administration from The Ohio State University. She dedicated countless hours to the education of children, spending over 30 years in the Sandusky City Schools; Greeneville Mississippi City Schools and Logan County Schools. For many years she served as Principal, West Mansfield Elementary School, retiring in 1987. She often recalled with fond memories the ice cream party on the school lawn with students in celebration of her retirement.
An active member of the West Mansfield United Methodist Church, she served as director of their church choir and on numerous committees in a variety of capabilities for numerous years. She also enjoyed spending time at the family cabin on Middle Bass Island as well as time with family and friends.
Visitation with the family is Saturday, March 9, from 11:00am to 1:00pm at the West Mansfield United Methodist Church. The Rev. Douglas Thompson will conduct a service on Saturday at 1:00p.m. at the church. Burial will be in the North Greenfield Cemetery. Arrangements are being handled by Wilson Funeral Home, Schnurrberger Chapel 222 W. Center St. West Mansfield.
Memorial contributions may be made to a Paul Family memorial fund for the West Mansfield United Methodist Church.

To order memorial trees or send flowers to the family in memory of Twyla Paul, please visit our flower store.