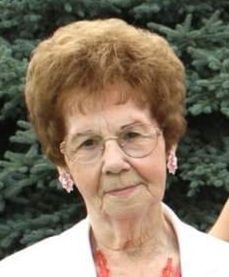 Virginia A. Stanford, 94, of East Liberty, passed away peacefully on Tuesday, February 22, 2022 at the Homestead at Logan Acres following a brief illness.

A loving mother, grandmother and sister, she had a strong work ethic which was on display her entire life. She also had a flare for life to go along with it, making sure to get the most of her 94 years. She loved attending the activities of her children and grandchildren, going fishing, and watching the Cincinnati Reds and the Kentucky Wildcats.

She was a 1945 graduate of Allen Center High School, retired from Bulldog in Bellefontaine where she had worked for 25 years and later worked in the deli at Kroger in Marysville. She was a proud, active President of the Allen Center Alumni Association and attended the Monroe Community Church in Pickrelltown.

Born June 25, 1927 on the family farm on W. Darby Road, she was the daughter of the late Francis and Elsie (Rice) Forsythe. In addition to her parents, she was also preceded in death by her husband, Charles Stanford; a son, Jimmy McCreary; and her sisters, Janet and Dorothy.

Funeral services will be held at 2:00 P.M. Monday, February 28, 2022 at Wilson Funeral Home, Mannasmith Chapel 621 W. Fifth St. Marysville. Burial will follow at the Milford Center Cemetery. The family will receive friends beginning at 11:00 A.M. until the time of the service on Monday at the funeral home.  Memorial contributions can be made to Universal Home Health & Hospice in care of the funeral home. Condolences may be sent to the family at www.wilsonfuneralhomesinc.com

To order memorial trees or send flowers to the family in memory of Virginia Stanford, please visit our flower store.